In this post I’m going to do at least two things. One of those things will be to gather together and lightly compare some concepts which I’ve encountered in the past few years and which seem to bear some similarity to one another. While these ideas do not perfectly map onto the “nerd” stereotype, they all intersect with it, at any rate. Another of those things will be to discuss my own relationship with those concepts, mostly how I can (or can’t) understand myself in light of them. If I do a third thing, it will only emerge out of the other two: I might incidentally illuminate my understanding of the concepts better and maybe, just maybe, illuminate them better for you. Also, I will talk a little more about austim, though I hope you don’t take this to suggest an equivalency between being autistic and being a nerd.

(My apologies for any formatting errors in this post. I am working from my tablet and switching between unfamiliar, seemingly glitchy apps.) 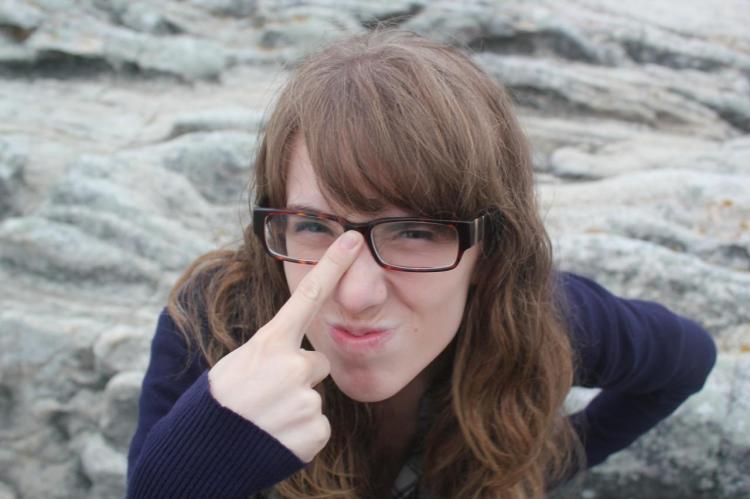 Let’s begin with analytic cognition. I first encountered it through Connor Wood, who summarized some research on cognitive styles at Science and Religion. Wood describes two basic cognitive styles, identifiable both by brain scan (different areas light up) and by thought patterns: analytic or task-specific cognition prefers thinking about abstract casually-interdependent concepts while social or default cognition prefers thinking about interpersonal relationships and social norms. Only one cognitive style can be active at a time, so if you’re engaged in analytic cognition your social cognition will suffer, and vice versa. Furthermore, as much as everyone can switch between the two styles, a person who is good at one is usually (though not always) not so good at the other. This is construct has both a psychological and neurological component, in that it both describes certain kinds of cognition in abstracted terms and links them to certain regions in the brain. On the psychological side, there does not seem to be much reason for a person who is thinking systematically to therefore be less competent at thinking socially; the reason for this appears on the neurological side. When I first encountered Wood explaining these idea, he was using it to account for how rude and emotionally stitled Richard Dawkins and his ilk seems to be: because they think very analytically, it does not seem unlikely that their social cognition is comparatively weak.

END_OF_DOCUMENT_TOKEN_TO_BE_REPLACED

Malise Ruthven’s Islam in the World (Second Edition) is an excellent survey of Islam for those who are not yet well-read on the subject. What I have read of it so far (six and a half of its eight chapters) is well-researched and balanced, neither alarmist nor falsely flattering; Voltaire Panda lent it to me specifically for this reason, in contrast to some of Karen Armstrong’s writing. Further, it offers information I have never seen offered by any of the Muslims who have taught me about Islam (ie. acquaintances, university professors): the Quran’s historical, religious, and literary influences. It has also done a good job discussing the differences between Sunni and Shi’ite Islam, though I would have appreciated a summary in table form, and has a more textured, less rose-tinted description of Sufism than I have seen anywhere else. Ruthven also shows an informed and intuitive understanding of human spiritual needs and therefore does not rely on the political, material, or philosophical explanations of Islam’s development that most secular commentators privilege, though he also puts these kinds of explanations to good use as well.

Source: Cristian Viarisio at flic.kr/p/7fmue7; the Hagia Sophia was a Greek Orthodox basilica which was later converted into an Ottoman mosque and is now a museum

As with any survey, it covers quite a lot of ground and, alas, it can be hard to follow for this reason: the sheer number of movements, terms, approaches, factions, dynasties, and individuals can make it feel like one of those novels with innumerable similarly-named characters with shifting loyalties—Russian literary, high fantasy, or airport spy novels, as you prefer. The glossary at the back helps with this, but is far from sufficient.

As usual I’m not especially interested in writing a book review. I’ve learned a lot about Islam from the book, but instead of talking about it I’d be more inclined to just recommend the book. But I’ve also learned a bit about religion in general and Christianity in particular. It’s these insights that I’d like to share. END_OF_DOCUMENT_TOKEN_TO_BE_REPLACED 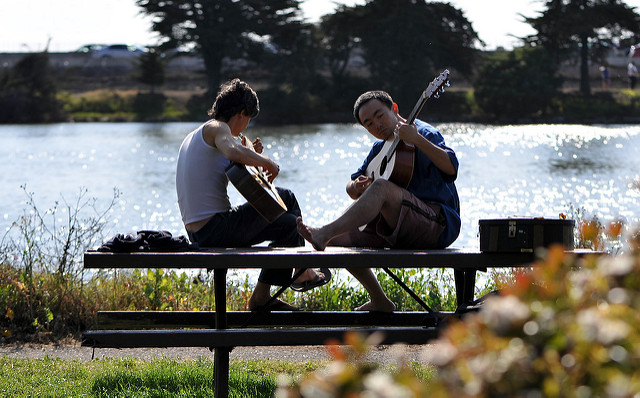 Alas, when I lent I Am a Strange Loop to Voltaire Panda, I had not first recorded Hofstadter’s chapter on magnanimity, the particular virtue besides paradox-friendliness that he celebrates in the book. This means that I must proceed by memory, which is never reliable. Nonetheless, as I struggle with boredom over the “Clouds, Daffodils, and Jam that Will Not Come Together Again” series that I was planning to continue, I thought I might write about fun portions rather than just the next portions to keep everyone’s interest up, and I think magnanimity is what I’d most enjoy discussing.

Writing about Hofstadter’s sense of magnanimity most appeals to me after reading Rachel Held Evans’s Searching for Sunday: Loving, Leaving and Finding the Church, in which (among other things) she discusses the qualities of Alcoholics Anonymous meetings that she’d like to see churches pick up: namely, the way AA members begin with a leveling introduction of their struggles and weakness. Being open and honest in this way creates a strength of relationship which most churches seem to lack. I probably won’t mention Evans again in this post, but you should know that it’s in the back of my mind.

END_OF_DOCUMENT_TOKEN_TO_BE_REPLACED

My friend Jon has to write a speech for an upcoming wedding and asked that I write this post giving my insights into writing speeches, on the strength of having written a single best man’s speech, assisted my brother in the writing of a second, and having a good head for generic forms. Given that curriculum vitae I would understand if you took the following with a grain of salt. 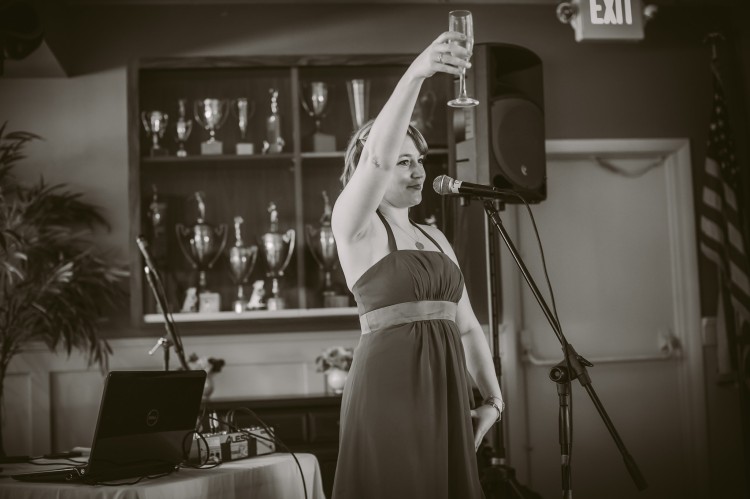 Assuming that I’m not speaking as the groom (or, I guess, the bride), I would start by planning for roughly four components: prefatory material, anecdotes about at least one of the bride and groom, commentary on the marriage to come, and a through-line. I think the most important thing, after making sure the anecdotes are appropriate to the spirit of the occasion, is to ensure the first three parts (prefatory material, anecdotes, commentary on the marriage) cleave subtly but surely to the through-line.

END_OF_DOCUMENT_TOKEN_TO_BE_REPLACED

[Content warning specific to section III: discussion of gender, sex which remains (I think) in the spirit of social justice culture but does disagree with specific prevalent ways of articulating that spirit]

I have no interest in any definition of the word real which isn’t useful. If I cannot use the word real to distinguish between unicorns and horses, Conan the Barbarian and Conan O’Brien, Iceland and Dinotopia, then it is of no use to me. I want to say that Iceland is real while Dinotopia isn’t—or, more accurately, I want to say that I wish Dinotopia were as real as Iceland is. Therefore as I try to define this word—real—I want to make sure I can use it.

Usefulness may seem like a silly and fringe-case qualification, but it isn’t. An example that a friend recently provided for me: a physicist tried to convince him that the table they were talking over was not real. He did not tell me the details of the argument, but I can imagine them. The table is mostly empty space, with an arrangement of molecules filling out a tiny proportion of the “table”; there is no firm distinction, on the level of fundamental particles, between the table and the air around it. Even those particles are not “real,” being made up of—strings, I guess? I don’t really know.

END_OF_DOCUMENT_TOKEN_TO_BE_REPLACED

This 2015 I read a number of books this year; these are not necessarily the best ones or the ones I enjoyed the most. However, they are certainly the strangest ones, the ones which I could say the most about. Therefore this might run a little long.

END_OF_DOCUMENT_TOKEN_TO_BE_REPLACED

My laptop’s adapter has been broken since Christmas and I did not get it replaced until today. Unfortunately, this means that I not only couldn’t post my Most Interesting Books of 2015, but I also could not finish writing it. I hope to have it, and other non-scheduled content, up soon.

On the first Saturday of each month for at least the next little while I intend to share here one of the Weekly Wonders from that previous project. This time I am sharing Fermi’s Paradox, which has to do with aliens and their unexpected absence.

This week’s idea is Fermi’s paradox.

Derived from the arguments of Enrico Fermi and Michael H. Hart, physicists, Fermi’s paradox refers to the seeming contradiction between the high probability that extraterrestrial civilizations exist on other planets and the utter lack of evidence for those civilizations. It seems incredibly likely that aliens exist, but we’ve never seen them and we don’t know why we haven’t. Fermi’s shortest formulation of the paradox is this: “Where is everybody?” END_OF_DOCUMENT_TOKEN_TO_BE_REPLACED

Gripped by some spirit of folly, I have just today decided to take part in National Novel Writing Month (NaNoWriMo). You can follow my progress and misadventures under the username ChristianERH, with the not-quite-a-novel Wood Sheep Miscellany. You will recognize me by this user picture: 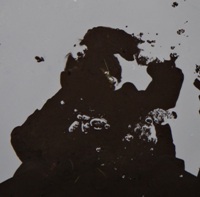 I would appreciate writing buddies, so let me know if you are doing the same.