As I mention in my posts on his A Passionate Balance: The Anglican Tradition, Alan Bartlett leans heavily on the common idea that Anglicanism has three streams. In Bartlett’s understanding these are the Catholic, evangelical, and liberal streams. Each emphasizes, without monopolizing, one of the legs of the Anglican tripod or stool (another common metaphor): tradition, Scripture, and reason, respectively. Looking around a little online, I saw other people mention these three streams or strands of Anglicanism, especially when referring to the Church of England. 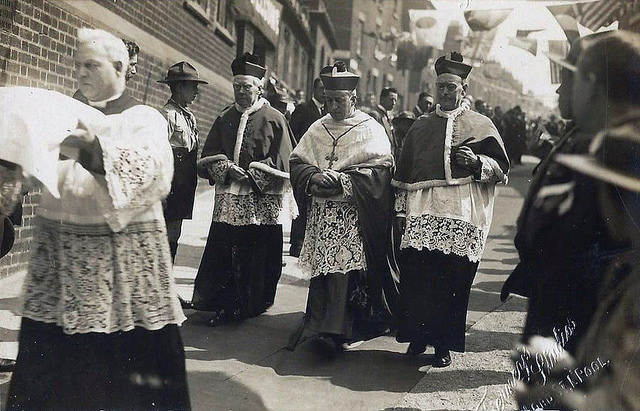 But more often than this configuration, I saw American Episcopalians discuss a different three streams: the Catholic, the evangelical, and the charismatic. (Here is one example.)

Why replace the liberal stream with the charismatic stream?

Someone who knew little about the Episcopalian Church might think it’s just good description: if liberalism has diminished in the Anglicanism of the United States and charismaticism grew in its place, it would make sense to change the metaphor. But the liberal stream of Anglicanism is perhaps more represented in the United States than it is anywhere else, at least in terms of the influence it has over the national church.

If I had to guess (though perhaps I’m not being very charitable here), I’d say it is an attempt to replace progressive Christianity with conservative Christianity as the norm and is part of the schismatic Anglican Church in North America‘s attempts to replace the Episcopalian Church in the Anglican Communion. It looks very much like an attempt to retell the history of the Anglican Communion so that the liberal stream disappears or at least becomes illegitimate. The liberal stream of Anglicanism, with its focus on continuing revelation through human reason applied to Scripture and liturgical or ecclesial tradition, has been the home of progressive Anglicans; removing it and replacing it with charismaticism, which tends to attract more conservative members in the United States, would define Anglican unity-in-diversity in such a way that diverse political views are quietly excluded.

A more charitable guess might be that some Episcopalians are observing the rise of charismatic Anglicanism and want to involve that expression in the Anglican story. I’m fine with this; in fact, I think it ought to be done. But there’s a way of doing that outside of ousting liberal Anglicanism. You could instead talk about four streams of Anglicanism. Alas, that lacks a certain symmetry: three legs but four streams?

The real reason I wanted to write this post is that I think there’s something else interesting to note about this change. Although not so well-formulated as the streams or the tripod, it would be in keeping with Anglican belief to say that God left three things to sustain Christians: the church, the Scriptures, and the Holy Spirit. Catholic Anglicans attend to the church most of all; evangelical Anglicans attend to the Scriptures most of all. The Holy Spirit figures centrally in charismatic Christianity, of course, and so by this logic one might be tempted to say charismatic Anglicanism fits the symmetry best of all… but that would omit an interesting and fundamental bit of Anglican theology. In Anglicanism, the Holy Spirit operates in humans particularly through the human faculty of reason. (Fans of C. S. Lewis might recognize this idea as a feature of his Miracles; in his argument there, he is not being merely Christian but rather specifically Anglican.) So the Holy Spirit, in its association with reason, corresponds neatly to liberal Anglicanism:

See? It’s all very neat, and replacing “liberal” with “charismatic” would break that neat set of correspondences since charismatic Anglicanism is no more invested in reason than are Catholic or evangelical Anglicanism.

As Francis Bacon observes, though, symmetry in worldviews is an idol of the theatre; Northrop Frye goes further to say that symmetrical systems are best thought of as poetry rather than science. I think we might avoid tight correspondences between these matters and observe, as a sociological fact, that a charismatic stream of Anglicanism is emerging in addition to the more historic three of Catholic, evangelical, and liberal.