A Minor Experiment in Gender

While shopping for my mother’s Christmas present last December, I was in one of those seasonal pop-up stores that appear in malls in November and saw Katerina Plotnikova‘s 2017 Enchanted calendar, pictured here:

Reader, I wanted it.

Let’s sit a moment with those thoughts I was having. For a man to want this calendar, for a man to exit his clearly defined gender roles so much as to purchase this calendar, would mark something more than the mere gender failure I mentioned in the last post. Only the most preposterous and heinous kind of mentality could explain it: possibly bestiality, probably pedophilia, certainly hebophilia. I don’t think I was wrong to feel that such an attitude exists outside myself, in Fort McMurray or in the Western world broadly. But it’s ridiculous! I wanted a calendar, nothing more, but certain arbitrary rules about taste meant that expressing this want would bring down on my head a set of questions which, although triggered by my violation of a gender norm, far exceeded those gender norms in scope and severity.*

I bought the calendar. 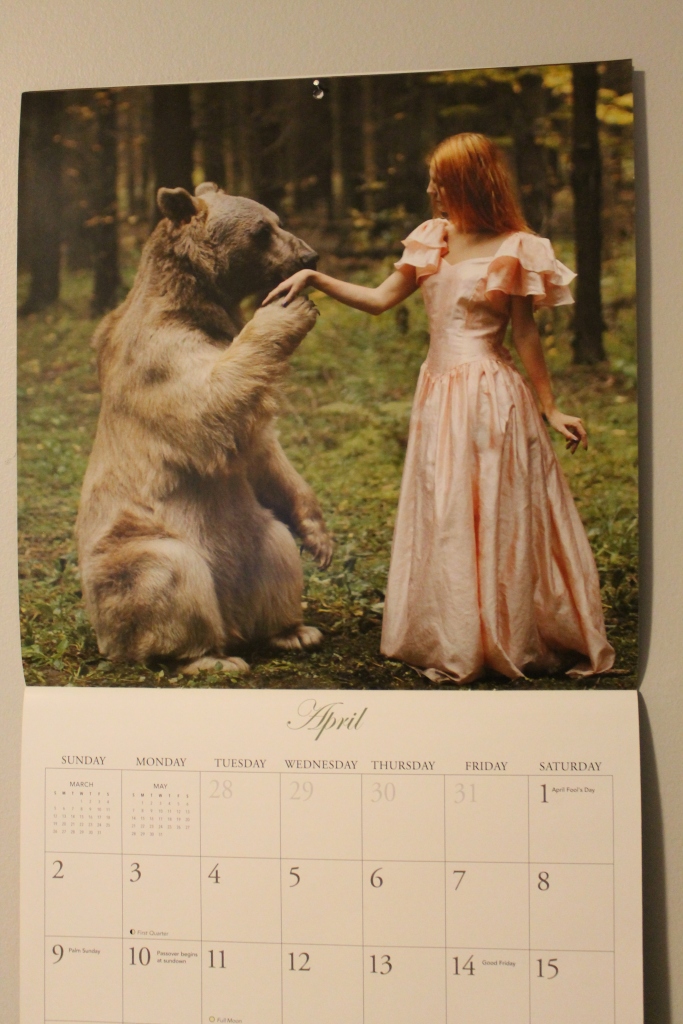 Why would I want this calendar? To explain it might concede the need to explain it, might say, “Yes, this appears deviant; I will put your concerns to rest by revealing the entirely non-deviant features of this product which I desired with my non-deviant desires.” Perhaps I should resist the urge to explain. I will explain.

I needed a calendar and had had little luck finding a calendar in Fort McMurray that I would want on my wall. Kittens and puppies are fine, but I see images of kittens and puppies with a frequency which only evolutionary biology’s convergence with the Internet can explain; I didn’t need a calendar of them and, besides, it seemed trite. There are no calendars of the franchises I might like to put on my wall; there is something grossly and glossily corporate about Avengers calendars,** though I was tempted by the Deadpool one. I wasn’t sufficiently organized enough to get a liturgical calendar in time for Lent, alas alas; although I expected to get a local history calendar thanks to my professional connections in the museum scene, that would only supply me with the calendar for my office. I needed one for home.

And I like animals quite a lot. I like not just cute animals, though I share enough of these on Twitter. I also like animals widely considered gross or scary, though I don’t consider them so; for instance I find many spiders adorable. The relationships between humans and animals captivate me: a depiction of poeple in gentle and affectionate companionship with beasts of all sorts is an ideal which is all the more aching-charming for the truths I know it belies (ie. that we humans are killing the world). The fairy-tale femininity of the human subjects is unnecessary to my appreciation of the calendar, but I don’t know that it is wholly incidental. Whether well or ill, the colours and cleanliness and drapery of the dresses, and their clear intimation of high society (or at least garrisoned society), heighten and nuance and enliven that companionship and affection. Humans are animals of course, but to say that humans are animals is itself a kind of lie. We are unlike animals in so many ways: not only are our minds mutually alien, but we have effects on their environments and their lives far more severe than their effects on ours. It is by denying the human subject’s animal nature through courtly dress that the images emphasize this separation, maximizing the effect of the subjects (apparently) crossing it. Old-fashioned and high culture exists in conventions and those conventions are usually tightly gendered. So the femininity is not incidental, though a dapper masculinity might be just as effective.

I bought the calendar not merely because my desire for it exceeded my fear of violating gender norms. I thought a bit about Richard Beck’s writing on his pink accessories: he likes the colour pink but he knows that to wear it in Texas, where he lives, is to invite serious questions about his sanity, and so he wears it more often in order to prepare himself for the times he must defy far stricter conventions for far greater stakes. I thought about spitting in gender’s eye, but I also thought about the fact that I would never want to wear a dress, that I would never wear make-up, that I am so mentally enslaved to the masculinity I’ve adopted that I would rarely even think of violating it. Rarely–but this was such a time. I thought that if I bought the calendar and put it on the wall I would help make visible a masculinty which had been invisible to me for such a long time and many of whose contours were still invisible to me. I cannot carefully and rationally consider what I do not know. I thought this might help. And so, after standing in the pop-up Christmas gift store thinking about it for what must have been nearly twenty mintes, I bought it.

It was the first of two such purchases. The second was a tarot deck.

I had long thought that the tarot was foolish: the idea that the universe might conspire to present particular cards in a particular order seemed nonsense to me. How would the universe, in its mechanism, understand the signification of the cards? The significance is not legible in physics. But the human unconscious, if that is the driver, cannot move the hands in such a way to determine the order of the cards; although there are cheats to shuffling, for most people the result is deterministic chaos. That which could acheive the purpose does not understand it; that which understands the purpose cannot acheive it. And yet…

I learned from S. Bradford Long’s post on the tarot the difference between using the tarot for divination and using the tarot for meditation (though, to be technical and use the jargon, it’s actually contemplation and not meditation that you would use with the tarot). And I had been re-reading Michael Ward’s Planet Narnia, which discusses C. S. Lewis’s love for astrology; and I had also been thinking about Robertson Davies’s later emersion in Jungian archetypes, and I wondered if I might benefit artistically from some similar system. My two primary modes of thinking are analytical and introspective (unless you include catastrophizing); perhaps I needed to shock myself into something else if I was to deal further with my non-conscious thoughts. Given my resistance, and my growing attraction, to the tarot, I thought it might be just the thing. 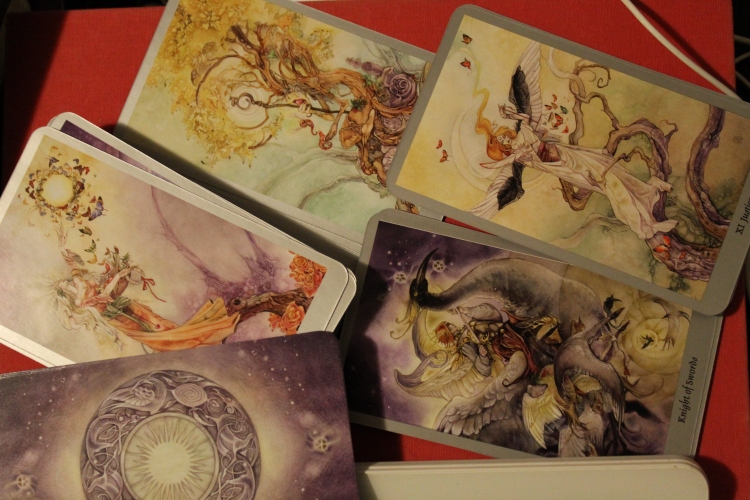 The deck art and design is Pui-Mun Law’s, but I took this photograph of select cards.

I will discuss my use of the tarot more in a subsequent post, which will hopefully put to rest the questions some readers will have (but aren’t you Christian? fairly hard-headed and rational? generally skeptical of New Age stuff?); in the meantime, I want to note that my selection of Pui-Mun Law’s Shadowscapes deck over other attractive and well-respected decks was an attempt on my part to make another anti-masculine choice as an experiment. Despite its willowy feminitiy, I really enjoyed the artwork which Long had shared and which appeared on the Amazon page. I thought the mythology/fairy-tale/Celtic Arthurian romance aspects of it would be evocative particularly for me. If I meant this to be a shock to my analytical phallologocentric system, I might as well make it as shocking as possible within my moral range. I said no thanks to the Thoth deck and other goetic so on, but I thought it might do me good to suffer the femininity of things that I otherwise really like. I have not suffered so much after all… but then, little of this has been public. It has been more difficult than I care to admit to realize how bonded I was to my ideas of masculinity and it has been with embarrassment and trepidation that I struggle against them. The costs would be greater to do so where others can see and judge, and deprive me of respect and opportunities.

So let me take that next step and make it more public: thank-you for reading this post.

* Let’s sit a moment, too, with the observation that gender norms, in this case, act against capitalist interests. In capitalistic logic it is nothing but good that I want to purchase a product; the only reason I might not do so is because I needed to work harder, to convert more of my labour into another person’s capital, in order to deserve that product. My wanting the product is a wholesome incentive to do that work, to give that labour away in exchange for a fraction of the capital my employer can convert it into, so that I can simultaneously afford to purchase the calendar and keep myself sufficiently healthy and housed to continue converting my labour into someone else’s capital. As it happens I work for a non-profit, so I spit on you, capitalism. Nonetheless.
** My goodness, what a snotty thing for me to have written. Still, even though I quite like the Marvel Cinematic Universe, I wouldn’t want one because of the Avengers’ manufactured popularity. I’m not above all forms of pettiness.

One thought on “The Calendar and the Cards”