On the first Saturday of each month for at least the next little while I intend to share here one of the Weekly Wonders from that previous project. This time I’d like to introduce you to Ammit, an ancient Egyptian figure for entropic forces.

This week’s fantastic being is Ammit. 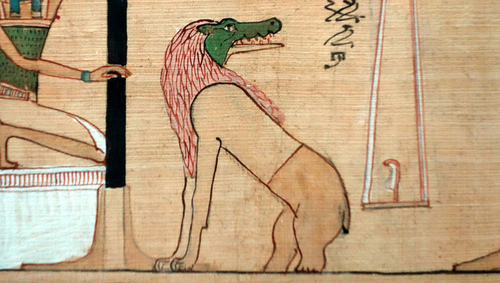 Source: Wikipedia, cropped by me.

Her name means devourer or soul-eater in ancient Egyptian; her titles are Devourer of the Dead, Eater of Hearts, and Great of Death. (The English translation of Jorge Luis Borges’s The Book of Imaginary Beings calls her Eater of the Dead.) She was a female demon with the head of a crocodile, the mane, front legs, and forebody of a lion, and the hindquarters of a hippopotamus.

When an Egyptian died, their soul had to pass through Duat, a dark and demon-infested underworld; at the end of this journey, they would come to the Hall of Two Truths, where rest the scales of justice. Anubis, god of death, weighs the Egyptian’s heart on the scales against Ma’at’s (goddess of truth) ostrich feather, to determine if the heart is pure. Thoth (scribe of the gods) watches to record the result; Ammit waits nearby as well. If the scales tip in the right direction, the deceased may continue on toward Osiris and immortality; if the scales tip in the wrong direction, the heart is cast to Ammit, who devours it. If Ammit eats a person’s heart, they are said to “die a second time” and to be restless forever.

Despite her company, Ammit is not an object of worship: Ammit is the embodiment of destruction, of all that Egyptians hated and feared, of the consequences of not following Ma’at—that is, truth and order and balance and law. Ammit is entropy, the reeking maw of chaos, eternal negation, the Nihil gnawing at the heart of the world. And, in some depictions, Ammit is adorable.