There are some pieces of writing from my previous degrees with which I feel happy enough that I might like to share them. I’ll be replacing my Revisiting posts some months with FtPA (From the Personal Archive) posts instead. Today, I’m offering a short response paper for a 2008 undergraduate course at Queen’s University with Michael Snediker called American Literature: The Fabulous and the Mundane; my paper was based on our readings of Edgar Allan Poe’s The Narrative of Arthur Gordon Pym of Nantucket (1838). This paper is only an undergraduate offering and furthermore reads much better after one has read Pym, but if you haven’t read the novel this might still interest you as an example of a genre. 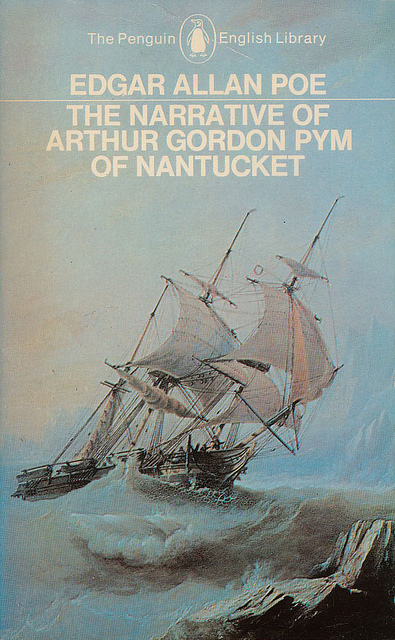 For a book about a journey, Pym spends little time actually doing anything. In fact, for most of the time that Pym is aboard the Grampus, he does nothing of any importance. Pym spends about twenty pages attempting to survive in the hold, and for all of his drawn-out exertions, only two passing references in the text have any bearing on his fate: “had it not been for the receipt of the note, I should undoubtedly have fallen upon some plan, however desperate, of alarming the crew, and both our lives would probably have been sacrificed in consequence” (55-56); and “As I fell, the carving-knife was shaken out from the waistband of my pantaloons, and dropped with a rattling sound to the floor” (43). In the first instance, Pym only survives because of inaction; in the second, he saves himself by passing out accidentally and dropping a knife, the clatter of which Augustus hears. His most important actions, therefore, are those where he displays the least agency. This lack of agency is especially noticeable—or unnoticeable, more accurately—in the comparative brevity with which these events are depicted.

Pym’s efforts in overcoming the crew are also minimal. He allows himself to be painted by Peters (79) and then enters “in the midst of the party” (83)—standing motionless and silent. This feat of effort actually killed one member of the crew (84). In the combat Pym does dispatch one aggressor with a pump-handle (84), but beyond that he is too “encumbered by [his] disguise” (84) to be of any use. Yet even when they recapture the Grampus, they are unable to save it. After a destructive gale, they are rendered rudderless and mastless, and therefore incapable of any nautical maneuvering. In the face of this impotence, Pym attempts to control at least the impulses of the crew, trying to stimulate sobriety and hope, but in the end cannot: they not only engage in cannibalism despite his arguments (114), but he is compelled to participate, both in the act itself and in the retelling, in which the events have control over the narrative—”Let me run over this portion of my narrative with as much haste as the nature of the events to be spoken of will permit” (115; italics mine). The food they spend much time retrieving and preparing is lost as sea (130), while the food they actually eat comes upon them by chance (131). Finally, Pym’s salvation is secured only by merit of the fact that a friendly vessel passed by at the end of Chapter 13. His stay on the Grampus, then, is defined either by passivity and inaction or by fruitless activity; Pym’s numerous attempts and decisions have lttle bearing on the outcome.

This distinctive lack of agency is apparent not just in Pym’s character, but through all events upon the Grampus. Augustus spends time locked up and ignored by the crew (53) and later must wait entirely upon Peters’ whim (71). Some of Peters violence in the cabin was achieved by the rocking of the boat—completely out of his control—and by the paralysis of the crew (84-85); both of these methods are without agency. Characters repeatedly become intoxicated and lose their decision-making faculties. The captain loses control of his ship, the mutineers lose control of the ship, the survivors never gain control of it, and most of the characters die, an ultimate lack of control.

The characters are at one point faced with a direct embodiment of this lack of agency, in the form of the ghost ship. They note that “[s]he yawned about considerably,” suggesting that “the helmsman [is] in liquor” (100). In fact, the ship is not helmed by anyone, the entire crew being dead. It is truly a ship without agency. The effect this has on the remaining crew of the Grampus is horror, but also in surrendering their own agency: as Pym says, “we could not help shouting to the dead for help!” (103). The ghost ship moves by “deliberately” (103), while the crew is unable to act upon the proximity of the vessels. In this sequence all action is rendered inconsequential, and yet the narrator spends a deal of time discussing it. Indeed, the passages sets up a sort of mirror, where the ghost sip reflects and provokes the lack of agency of the Grampus.

I find it interesting to consider what the lack of agency bears on the text itself; to an extent, both the character Pym and the representation of Poe deny agency over the text. Pym is essentially guilt-tripped into ‘writing’ the tale, and thus has no responsibility for it, while Poe costumes himself as an editor, relinquishing control of his narrative to the character—one who definitively lacks agency throughout the text. It seems to be a ghost novel, or a text without anyone at the helm. The presentation of the narrative, then, includes a repeated deference of control eventually to chance itself. Of course, this is misleading and ironic, since Poe presumably has complete mastery over this journey, crafting our expectations by genre and reference to ‘real’ events and by denying the premises we anticipate. By burying his own storytelling agency in the toss of the Atlantic, Poe asks the reader to believe that there can be a novel without a master, without control, and therefore without direction. What are we to make of this, when the preface itself gives us the direction in which we know we must go?

One thought on “From the Personal Archive: The Ghost Ship Called Pym of Nantucket”