Not only the most fascinating play of the period, but its greatest prose work (in England), has melancholy for its theme. Burton’s Anatomy of Melancholy is an exhaustive analysis of the causes, symptoms, treatment and cure of melancholy, with two enormous appendices on love melancholy and religious melancholy. Burton was an Oxford don, and his chief amusement is said to have been going down to the Isis river and listening to the bargemen swear. The story may be true, or it may have been invented by someone who noticed that the qualities of Burton’s prose, with its vast catalogues, piled-up epithets, Latin tags, allusiveness and exhaustive knowledge of theology and personal hygiene, are essentially the qualities of good swearing. Burton assumes rather than discusses the connexion of melancholy with creative power: being a scholar himself, like Hamlet, he associates it rather with the scholarly temperament, and includes a long digression on the miseries of scholars. On religious melancholy his position is simple: one can best avoid it by sticking to the reasonable middle way of the Church of England, avoiding the neurotic extremes of papist and puritan on either side. But in love there is no reasonable ground to take, for its very essence is illusion.

This comes from Northrop Frye’s “The Imaginative and the Imaginary” in his Fables of Identity: Studies in Poetic Mythology. Frye is considered obsolete in the discipline, but as with almost any critic who has had any popularity or respect in the field at all, he has excellent observations. I rather like the ones above.

Every third Saturday of the month I intend to re-post something I wrote for one of my assorted old blogs or tumblogs. This week I am revisiting “At the Feet of the Arkans” from the Thinking Grounds, a bit of multiculturalist fantasy asking what we could learn if the Cainites, a people who are always conjoined twins, had a civilization of their own. 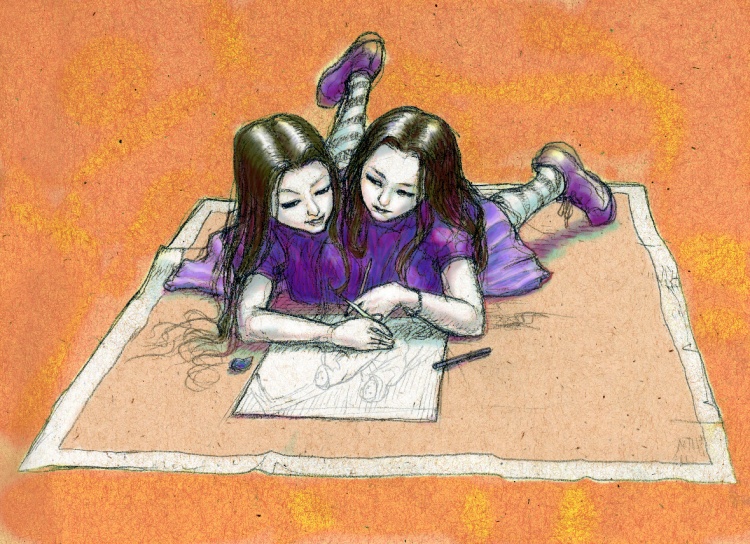 At the Feet of the Arkans

At the Weekly Wonders two weeks ago I posted about the Cainites. There have been lots of versions of the descendants of Cain—vampires, monsters, non-vegetarian barbarians—but I was looking at a specific, and very obscure, tradition from Jewish mysticism. It was said that Cain’s children were led by God into a dark cavernous world or place and where each given two heads. Their bicephaly was possibly a reminder of Cain’s brother Abel, who he killed, and thus the need for peace between siblings, but in the stories it usually seems to be a symbol for internal conflict. Solomon rules that Cainites are merely two-headed people rather than sets of twins sharing a body, and so the fact that one head is often pious while the other is wicked is taken as an external, visible sign of every human’s dual nature. Solomon, however, was wrong: two minds in two brains means there are two people. That is all the evidence you need. The land in which these Cainites were said to live is usually called Arka, so I tend to think of them as the Arkans.* END_OF_DOCUMENT_TOKEN_TO_BE_REPLACED

If I’m right to endorse the Hofstatderean idea of the self (that is, that self is a pattern, and any instance of that pattern is an instance of the self), then I probably have to support the idea that if my pattern were replicated in a computer, it would also be a version of myself. Again, as always, it might be a poor-quality or imperfect version, but it would still be a version (instance? copy?). As a consequence, a person might want to extend their lives after death by uploading their consciousness to a hard-drive. If you believe in some sort of essential self that is not contained in any pattern, or if you require some historical continuity in order for identity to persist from one instance to the next,1 then you might not identify with a copy of your consciousness (and sub-consciousness, presumably) on a computer. But if you ultimately accept Hofstadter’s idea, then you should accept that the simulation on the computer really is you, to the extent that it is a faithful representation of your pattern.

So let’s talk about afterlives.

Christian Hendriks 2015; detail of a diorama at the Field Museum

END_OF_DOCUMENT_TOKEN_TO_BE_REPLACED

On the first Saturday of each month for at least the next little while I intend to share here one of the Weekly Wonders from that previous project. A very particular version of Cainite (descendents of Cain) is this month’s wonder: these are bicephalic people living in a subterranean world. Be warned that this entry is long.

This week’s fantastic being is the Cainite. A bit of Jewish myth, the Cainites were the children of Cain, murderer of his brother Abel. There are lots of legends about Cain’s descendants, but I want to focus on just one: according to some obscure sources the Cainites were a race of two-headed people. I apologize for this entry’s excessive length: there is no convenient summary like a Wikipedia article, so I will need to collect the assorted versions of the story myself. Skip down to the last paragraph (after the second photograph) for the briefer sort of entry I usually provide.

END_OF_DOCUMENT_TOKEN_TO_BE_REPLACED

Yesterday afternoon I left work with a colleague in response to a voluntary evacuation order for my neighbourhood, Thickwood Heights in Fort McMurray, Alberta. The wildfire situation evolved and we reacted; last night I spent the night with that colleague and her family in Conklin. I am now in Edmonton. At the moment I am exhausted and anxious, but I wanted to share some impressions while they are fresh, before I forget. This will be edited, somewhat raw, disorganized.

a) You’ve seen the images and videos, I’m sure. If you haven’t, #ymmfire on Twitter is your best bet. I have some photos but nothing so dramatic as what you’ve seen. Personally, the scariest moment was not the most photogenic: we were stuck in traffic on Confederation Way while quite a piece behind us we could see flames above the trees on the crest of a hill. I saw a man on TV last night saying that what was strangest was the combination of the sense of urgency with the need for patience and the general inability to do anything.

END_OF_DOCUMENT_TOKEN_TO_BE_REPLACED

“Tell me one last thing,” said Harry. “Is this real? Or has this been happening inside my head?”
Dumbledore beamed at him, and his voice sounded loud and strong in Harry’s ear even though the bright mist was descending again, obscuring his figure.
“Of course it is happening inside you head, Harry, but why on earth should that mean that it is not real?”

Whatever else Douglas Hofstadter’s I Am a Strange Loop might be, in its sixteenth chapter, “Grappling with the Deepest Mystery,” it becomes something like a spiritual memoire.

Strange Loop is Hofstadter’s attempt to explain human consciousness and personal identity through many elaborate analogies, the most pertinent being Kurt Gödel’s incompleteness theorem, showing that the mathematical language in Bertrand Russel and Albert Whitehead’s Principia Mathematica was capable of making self-referential statements despite the authors’ best attempts to prevent that from happening. His thesis is that human consciousness—or personal identity or what he calls a “soul”—is a self-referential pattern. A representational system that is capable of perception and categorization (in Hofstadter’s view, perception necessarily involves categorization) should be capable of perceiving and categorizing itself, and perceiving itself perceiving itself, and so on, and this self-perception will get “sucked into the [feedback] loop and cycle around and around, like a tree limb picked up by a tornado.” In other words, a soul is a pattern of thoughts that refers to itself, updating its model of itself as time goes by.

A consequence of Hofstadter’s view of the self—a consequence I happen to find convincing—is that a human brain contains more than one soul. Specifically, because I have representational models in my mind of everyone I know, I have a fragment of their pattern in my brain; if a person is their pattern, then in a very real, literal sense they inhabit my brain. His privileged example for this is a married couple, specifically he and his now-deceased wife Carol (content warning: in many cases Hofstadter seems flippant about serious mental disorders, in this case postpartum depression):

…Our oneness-in-twoness started to emerge clearly in my mind on several occasions during the first year of our marriage, right after we’d had several friends over for a dinner party and everyone had finally left and Carol and I started cleaning up together. We would carry the plates into the kitchen and then stand together at the sink, washing, rinsing, and drying, going over the whole evening together to the extent that we could replay it in our joint mind, laughing with delight at the spontaneous wit and re-savoring the unexpected interactions, commenting on who seemed happy and who seemed glum – and what was most striking in these post partyum decompressions was that the two of us almost always agreed with each other down the line. Something, some thing, was coming into being that was made out of both of us.