On the first Saturday of each month for at least the next little while I intend to share here one of the Weekly Wonders from that previous project. This time I am sharing Fermi’s Paradox, which has to do with aliens and their unexpected absence.

This week’s idea is Fermi’s paradox. 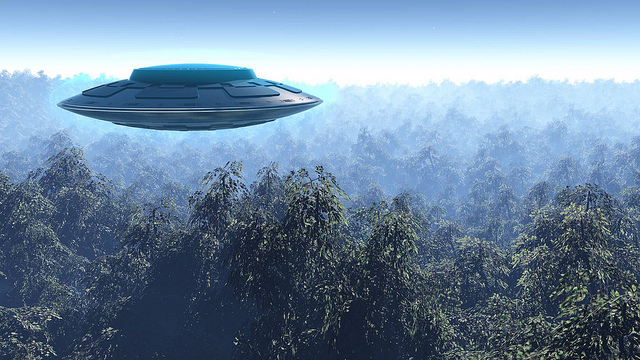 Derived from the arguments of Enrico Fermi and Michael H. Hart, physicists, Fermi’s paradox refers to the seeming contradiction between the high probability that extraterrestrial civilizations exist on other planets and the utter lack of evidence for those civilizations. It seems incredibly likely that aliens exist, but we’ve never seen them and we don’t know why we haven’t. Fermi’s shortest formulation of the paradox is this: “Where is everybody?”

Fermi and Hart argued thus: the Sun is a typical star and fairly young, and there are billions of stars in the galaxy that are billions of years older; some of these suns must surely have Earth-like planets, and if the Earth is typical, these planets may develop intelligent life; some of this intelligent life might develop interstellar travel, a technology that humans are already developing; even though interstellar travel is incredibly slow, the galaxy could be colonized in a few tens of millions of years; given how long life has had to develop, why has the Earth not already been colonized or at least visited by extraterrestrial life? Why have we not even found radio signals that seem likely to be evidence of alien life?

Other names for the idea include Fermi’s question, the Fermi problem, the Great Silence, and silentium universi, which is Latin for “silence of the universe.” Please note that in terms of radio broadcast the universe is noisy, not silent, but none of that noise seems to be communication.

There have been, in general, two attempts at answering the problem: the first is to look harder for aliens, and the second is to give hypothetical answers explaining the discrepancy. There are many attempts at the second, but a few interesting ones include the suggestion that tool-using intelligence is not an especially likely trait to evolve and so humans might well be one of the few or the only species to develop the use of tools; the particular conditions required for life might be very narrow indeed and therefore so few planets have those conditions that life is not likely to have arisen more than once; it is the nature of intelligent life to destroy itself and so it is quite unlikely for intelligent life to survive long enough to colonize other worlds or even to invent the radio (note that evolutionary pressures often cause species to develop traits which eventually doom the species); the universe does contain intelligent life, and most of them are super-predators, and the rest are smart enough not to advertise their presence, and those species that are stupid enough to advertise themselves with things like satellites and massive radio transmitters are usually killed early by the predators; most species don’t care enough to travel; we’re listening to the wrong signals, or can’t make sense of their signals; they’re busy with other things; the government is hiding the abundant evidence they have; everyone is listening and no one is talking; Earth has been quarantined because the aliens are observing us for scientific purposes and don’t want to interfere with their experiment (see also the Prime Directive from Star Trek); they’re already here and we don’t know it; we are evolved from the aliens who colonized Earth.

There’s also Bill Watterson’s answer: “Sometimes I think the surest sign intelligent life exists in the universe is that nobody attempted to contact us yet.”