At the same time that I was studying social media (for librarians) and therefore learning about face theory and discussing the ways identity is performative, on my own time I was also researching William Blake’s mythology. That coincidence provided one of those connections which I found helpful as a metaphor, and it has held up: I think William Blake’s idea of emanation is a good analogy for self-expression. Thinking of self-expression like the creation of a second, separate entity has been helpful to me, and maybe it will also be helpful to you. 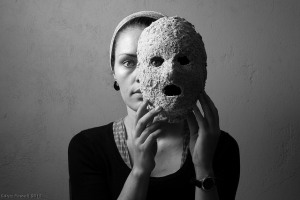 Let’s begin with face theory: in sociology, face refers to the particular way a person expresses themselves in a specific context. Face refers to the actions you choose, the things you say, and the postures and facial expressions you adopt; it can be thought of as a mask that changes according to audience and to the type of social interaction underway. People work to maintain their face and they feel emotional investment in their face, so that they become distressed when they lose it.

To be clear, people are always working on their face when other people are around; as far as I can tell, they probably work on it while alone, too. To the extent that we have been socialized, we always choose our actions from a culturally determined repertoire; we probably choose them even more carefully when we are trying to express ourselves. These actions may feel spontaneous, but that does not mean we do not act differently based on the circumstance. Consider, for instance, spending time with two different groups of friends; do we actually act precisely the same around each set of friends? Do we act precisely the same when around those friends as around our family? Perhaps comfort with a group allows a person to expand their vocabulary of actions, but that vocabulary is still bounded by the audience and context. What it means to be nice in a gaming group, where vigorous competition may increase everyone’s enjoyment and comfort (though this depends on who is present), is not the same as being nice in a workplace, where vigorous competition will not increase anyone’s enjoyment or comfort.

I’ve found that people sometimes resist face theory, or the idea that all behaviour is a performance rather than spontaneous. Many people resist any idea which suggests they are doing something, or motivated by processes, that they are not aware of, which may account for the resistance. I suspect, though, that people also resist because they dislike the idea that their behaviours are somehow artificial and therefore not authentic. But I suspect this resistance stems from a misconception: it is perhaps more helpful to think of authenticity as creating the most accurate reflection of your inner life that a particular repertoire of actions allows.

More limited repertoires make this more difficult, or limit the amount information about yourself that you can give, but that does not mean the performance is inauthentic. However, it does still set a limit: your face is constructed and your face is different from you. The problem with self-expression is that your expression, whether it is a painting or a poem or a set of

behaviours, is not yourself, whether that is your state of mind or your telos or your brain chemistry or your strange loop. Or, to put it yet another way, our performances are not always conscious or self-conscious performances, but since they consist of actions and utterances they are still, necessarily, performances, and to the extent that we are socialized they are performances limited to a particular repertoire.

I recognize that this is a difficult concept for some people, so when I was trying to articulate it in my library science class I really wished that talking about Blake’s mythology would have helped; alas, going on about obscure esoterica rarely does. Here I will therefore make the attempt I did not make there. 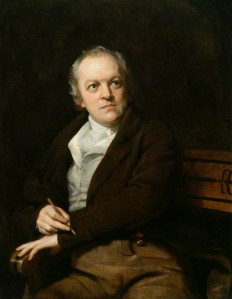 Now bear in mind that I am no expert about William Blake, and bear in mind that even experts have difficulty codifying Blake’s mythopoesis. In fact, most of what I know about Blake’s mythology is second-hand, since the Blake I have read did not articulate any of it directly. Therefore what I know about Blake’s mythology is one indirect interpretation; as this goes for a representation of Blake, what I’m about to tell you is limited. As a possible set of metaphors, I have found it useful. So, what I’ve learned from various sources, such as the Blake Archive, is the following:

In the beginning there was Eternity. Eternity is difficult to describe, but imagine it as an endless substance or field from which and in which agents (gods, angels, people) can create whatever they like, according to their creative potential. Moreover, in some way all agents come from and are part of Eternity. Greatest among these are the Eternals, which one might be tempted to call gods. These Eternals created various worlds from Eternity, each world according to the Eternal’s own nature. However, as disembodied creatures in their own separate worlds, the Eternals were unable to communicate with each other, to touch one another, to practice physical love, and so on, so some of the Eternals created Emanations of themselves. Emanations are physical forms as opposed to the Eternal’s spiritual form. These Emanations are extensions of their Eternal’s own nature, but as extensions they are separate from and somewhat different from the Eternal. Moreover, what remained of the Eternal when the Emanation was created was broken, into what Blake called the fourfold man: Humanity is the imaginative, creative force which perceives the Eternal; Emanation is the physical, sensory, passionate body; Spectre is reason, categorization, and rationalization devoted to protecting the self and therefore preventing the four parts from reuniting; Shadow is the suppressed, feeble, and toxic passions once Spectre is done with then.

What follows really takes us beyond what’s useful for the metaphor, but to give you some context: Albion, the primordial man and a great god-like being, divides into four Zoas, lesser (but still powerful) godlike beings. One of these Zoas, representing reason and therefore equating to the Spectre in a human, is Urizen, who creates his own world and then his own Emanation, named Ahania. This process makes him even more cramped, self-involved, and prone to self-defensive rationalizing. He denies that Eternity exists and that anything exists outside of the world he made from it. He puts himself up as the great God, and he exiles Ahania, his own emanation and the principle of pleasure. All people who live in his world are trapped there, divided like Albion and like Urizen; their Humanity—that is, their imagination, the only thing which can perceive Eternity—sleeps, and their Spectres conspire to keep people from realizing they and all things are part of Eternity by rigidly categorizing everything in logical terms. Only occasional moments and opportunities, called vortices, allow people to glimpse Eternity. Covering Cherubs, false images of the divine, call for human sacrifice and lead people deeper into deluded selfhood. This world is ours.

Most of Blake’s mythology is not relevant to my analogy, but I wanted to provide it so as not to mislead you and because it is just so enthralling. What does strike me as relevant is this: in order to engage with other people and escape utter solitude, the Eternals had to project or emanate a portion of themselves that the other Eternals could interact with. However, by doing this, the supposed self that they project, the Emanation, is no longer really themselves. By self-dividing they, at the same time, are able to interact with others and yet are more separate than they were before. Similarly, when we wish to express ourselves to others, we confide feelings or thoughts or interests or habits through words and actions; these words and actions, however, take on a life of their own and become a sort of mask. At the same time that they present us to others, they can become a mask covering us over. Our self-presentations may not truly have autonomy like Blake’s Emanations do, but they do have an identity separate from our own. Sometimes we experience the self-presentation more as self-expression and sometimes we experience it more as mask, but it is always both.

Now, I would not make the mind-body split that Blake does. Our body is certainly that which with other people can interact, but it is also the seat of those things which are private to us: our brain chemistry, our thoughts, our memories, and so on. Our consciousness may be locked away, alone, but it does determine many of the actions we take to express ourselves in the body, through its movements and poses. Nor are we diminished by self-presentation. Some of Blake’s insights are profound and ahead of his time—he seems to have anticipated Freud’s unconscious in the Shadow and it is worth remembering his emphasis that all reason is motivated—but his detailed spirituality seems to miss the mark somewhat to me. However, the one kernel that really helped me was the idea that the Eternals self-divided in order to encounter others; similarly, we create masks and personas, write painstakingly crafted poems or messages, choose certain clothes over others, decide whether to wear makeup and what makeup to wear, consider whether and what to shave, and so on, in order to express something of ourselves, but in so doing we can become more conscious than ever that our presentation is not really us.

Often, the British Romantics are thought to value spontaneity as an indication of genuine feeling. The idea that spontaneity and the breaking of restrictive social rules (“originality”) are central to authenticity has often been attributed to the Romantics. There is therefore a certain irony to finding William Wordsworth’s rough drafts, in which poems are revised and revised and revised in order to better create the illusion of spontaneity. The more I consider Blake, however, the more I wonder whether Wordsworth was hypocritical after all. Do we know that Wordsworth valued spontaneity so highly? Does communication not require skill, and so is self-expression not a craft? Perhaps authenticity is nothing more than the illusion of immediacy and directness, created with care and cleverness behind the scenes? This is not to say that authenticity is a lie (though I suspect it might be), but that if it exists then this careful crafting is the most reliable form it can take.

UPDATE 30/09/15: Mike Rugnetta at the Idea Channel has discussed something similar to this today in the video “Are You Literally What You Post?”; where I discuss all self-presentation together, he looks at how different forms of self-presentation are different in different media or sets of conventions.

2 thoughts on “On William Blake and Your Own Face”